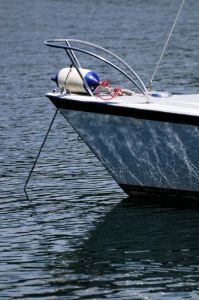 A 23-year-old man from Jupiter is facing a number of serious charges in connection with a 2011 boating accident that occurred along the Intracoastal Waterway.

Our Palm Beach BUI lawyers understand that the defendant is accused of striking an illuminated channel marker while speeding near Marcinski Road. Four other passengers on the vessel were injured, one of them critically with a skull fracture.

The charges against him include leaving the scene of a boating accident with serious injury, and four counts of violation of inland navigation rules.

Although authorities believe he had been under the influence of alcohol at the time of the crash, it’s not clear whether they will actually charge him with that because he wasn’t tracked down until the following day, when any alcohol that might have been in his system at the time of the incident had dissipated.

Still, it seems there has been enough evidence for him to face the other charges, which were filed by the Florida Fish & Wildlife Conservation Commission.

The FWC reported that the crash, which occurred almost exactly two years ago, left a 26-year-old male passenger with a fractured skull that required a 50-day hospital stay in West Palm Beach.

Witnesses said a group of people on a boat picked up the defendant from a home near the A1A bridge. From there, they went to a local tiki bar, and then to a rum bar. Over the course of the evening, it is believed that the defendant consumed somewhere between five and eight beers.

When the group left the second bar, he reportedly assumed control of the boat. As he drove, one of the other passengers reportedly instructed the defendant that he needed to lower his speed, as they were in a controlled speed zone.

However, this warning was not heeded. He was reportedly traveling at speeds of up to 40 miles per hour when he crashed into the channel marker.

The defendant then made it off the ship and fled, having a friend pick him up at a nearby gas station.

Officers found him the following day, with his girlfriend hiding behind a bar dumpster.

It’s not clear why it took so long to file these charges, but the latest was that he was being held in Palm Beach County Jail without bond.

BUI is charged similarly to DUI in that one is considered legally under the influence if he or she has a blood alcohol level of 0.08 percent or higher, per Florida Statute 327.35.

These kinds of incidents are more common than you might realize, especially in Florida. As we enter the summer season, bear in mind that there are an estimated 4,800 recreational boating accidents each year, with nearly 750 fatalities.

So regardless of whether your under the influence charges occurs on land or on sea, you will need to secure the services of an experienced defense lawyer.